Ethernet networks can be partitioned into multiple distinct broadcast domains using VLANs. VLAN domains are mutually isolated. Whenever a hosts in one VLAN domain needs to communicate with a hosts in another VLAN domain, the traffic must be routed between the two domains. This is known as inter-VLAN routing.

This document provides a VLAN configuration example for a small network split into two separate VLAN domains: SALES and ENGINEERING. The backbone consists of two VLAN bridges connected by a VLAN trunk. I will use a Linux-based router, RCPlive, connected to the trunk to provide routing between the two VLAN domains and the outside world. On the router I will also enable a number of services such as DHCP and stateful firewall. 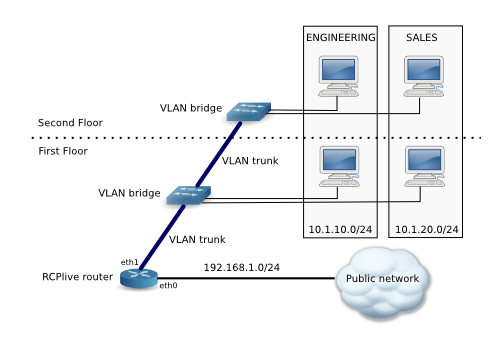 END_OF_DOCUMENT_TOKEN_TO_BE_REPLACED

Software-based routers have always played a role in the Internet, and are becoming increasingly important in data centers due to the convergence of video, mobile, and cloud services. Data traffic no longer moves simply from the subscriber into the network and then out again. Instead, most of the traffic is located inside the data center between various application servers within the network.

All this traffic can be routed easily using software-based routers running on commodity PC hardware. Such a router looks like just another server in the data center, and most of the time it is implemented using open-source software. The availability of the source code and the right to modify the software enables the unlimited tuning and optimization of the network traffic.

This article describes how to set up RCP100 routing suite on a Debian 7 computer. RCP100 is a full OSPF/RIP router for Linux. It works on 64bit computers, it is licensed under GPL, and it is actively developed.

The computer I am setting up has two Ethernet interfaces, eth0 (192.168.20.20) and eth1 (10.1.10.1), and it is meant to connect a small private network segment (10.1.10.0/24) to the larger public network. To isolate the private network, I configure Network Address Translation on the router and enable the firewall. Computers on the private network are assigned IP addresses using DHCP. The router also provides NTP and DNS proxy services.

END_OF_DOCUMENT_TOKEN_TO_BE_REPLACED

I do like the idea of an open-source software router, and I’ve tried several of them so far. Most open-source routers would concentrate on implementing the main IP routing protocols one by one. Administration features like CLI or SNMP seem to get less attention. There is little or no support for integrated Access Control Lists, NTP, DHCP or DNS functionality. This is in sharp contrast with the commercial routers where administration and network management are first class citizens.

RCP100 seems to break the tradition. It has a Cisco-like command line interface (CLI), and all the regular administration and management protocols. Starting with version 0.99 it also features a simple and intuitive web interface, making the router accessible to less sophisticated users and beginner administrators.

In this article I will set up a basic RCP100 IP router on a Ubuntu 12.04 computer using the web interface. This means there will be lots of pictures and no CLI commands. Networking experts will definitely get bored.

END_OF_DOCUMENT_TOKEN_TO_BE_REPLACED

Equal Cost Multipath (ECMP) is a network load-balancing method that enables the coexistence of multiple network paths form one source node to a destination node. The two or more paths between the nodes have the same routing cost, thus the traffic will be split evenly across, avoiding congestion and increasing the bandwidth.

ECMP is also a network redundancy method. In case one ECMP link fails, the traffic will move on the remaining links with minimal interruption in service.

For ECMP to work, a router will need special support in the forwarding plane and in the routing protocols deployed in the network. For experimentation I will use two Linux virtual machines on my host computer. The Linux kernel has an excellent ECMP implementation, as for the routing protocol I will use OSPF.

The virtual machines are set using virtenv. It is a very light virtualization solution based on Linux containers (LCX) implementation in Linux kernel. Each machine owns a slice of the Linux kernel running on the host computer, with full network and process separation. In each virtual machine I run one instance of RCP100. RCP100 is a router control plane for Linux platforms, supporting among other things OSPF and ECMP. RCP100 also features a CISCO-like command line interface (CLI) which simplifies router operation for people already skilled in configuring commercial routers.

The network diagram is as follows: